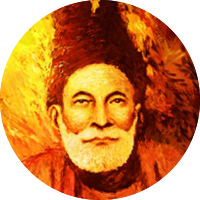 Ghalib had seven children but unfortunately none of them lived for more than fifteen months and Ghalib died childless. Due to his loneliness and some other reasons, Ghalib had adopted Zainul Abidin Khan Arif who was his wife's nephew. But at the peak of his youth, at the age of thirty-five, Arif also died, and Ghalib wrote the Masnavi Qadir Namah for the young orphans of the late Arif. In fact, this Masnavi is a kind of dictionary in which Ghalib has given Hindi or Urdu synonyms of commonly used Persian and Arabic words so as to increase the vocabulary of the readers.